Dan Müller is a German performing drummer and percussionist who reflects on music as an integral component of life and who knows how to infect all performers with his positive attitude, peaceful open mind, and a warm happy energy. As a drummer and percussionist he is present in many musical projects for almost two decades, playing a diverse range of instruments in a variety of genres, although his musical soul found its place in Latin, Funk, and Afro-Cuban rhythms. Dan enriched his way of playing with a wide range of elements that he discovered in Ghana, where he spent some time learning and playing pure African percussion.
Since October 2015, Dan has also been actively contributing to the richness of the mysterious sounds and rhythms of Africa, as a drummer at the world’s most successful musical “The Lion King” in Hamburg.

Many years before his trip to Ghana, as a young boy, Dan was attending piano, trumpet, and drum lessons. His parents taught him the values of freedom, felicity, flexibility, and satisfaction with who you are and what you are doing, so he used this wisdom to build his own path in life. Later, as he started working on different cultural projects – organizing concerts, exhibitions, giving workshops, and performing, it was clear that he would embark upon a career as a professional musician.

In 1998 Dan enrolled at Carl Maria von Weber University of Music, Dresden, where he graduated Jazz/Rock/Pop drums. Meanwhile, he also studied drums and percussion (Latin/Jazz/World music) at the Codarts Conservatory of Rotterdam (2000-2004), where he attended many Master classes, among others with Bobby Sanabria, Orestes Vilató, Alain Perez, Ivan “Melon” Gonzales, Ernesto Simpson, Pepe Espinosa, Ralph Irizarry, and Jim Chapin.
He made the Netherlands his home for 12 years, accumulating valuable experience in a multicultural environment, meeting people from around the world, learning from and collaborating renowned master musicians, including Lucas van Merwjik, Nils Fischer, Jan Laurens Hartong, Marc Bischoff, and Martin Verdonk. He frequently came on stage for jam sessions with other great and talented musicians, improvising and interacting on a high level. Jam sessions were the perfect place for him to continue to deepen his musicality and abilities and to enhance his technical skills.

Through all these years, Dan has been touring a lot with different bands and projects ranging from Latin, Jazz, Salsa, World music to Pop, Dance, and Rock ‘n’ Roll. For almost a decade, he was playing and performing with a percussion group from Ghana. On stage, with powerful percussion and traditional dance, they were bringing the African culture and spirit to life.

He shares and exchanges his knowledge and experiences through teaching on several music schools in Germany, as well as through organizing and conducting drum, percussion, and ensemble workshops. Countless workshops, practice sessions, and tours shaped his sharp feeling for rhythms of all kinds.

Drawing on the influences of great musicians and teachers like John Riley and Jim Chapin, being inspired by West African music, Jazz-funk, and Afro-Cuban music (Latin jazz, Salsa), he continues to dedicate himself day by day to growth and further innovating his instrument. 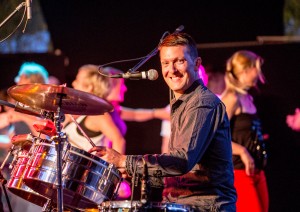