The group was formed out of Latin jam sessions, which took place at a variety of locations all around the Netherlands. Dan invited several friends to join him on-stage for extended musical improvisations, rhythmic grooves, and long sets of music that were crossing genre boundaries: Dan Mueller on drums, Marc Bischoff on piano, Mick Pauuwe on bass, Jens Kerkhoff on percussion, Christoph Titz and Maite Hontele on trumpet, and Christian Patzer on saxophone. The joy of playing together, developing on the background of their individual musical approaches and differing performing experiences, gathered them in 2004 for an appearance at Dan’s graduation concert at Carl Maria von Weber University of Music, Dresden. Dan’s Latinjazz Connection was the forerunner of today’s Latin jazz formation Sonido del Mundo. 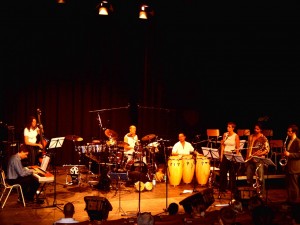